It was a swealtering summer night in the suburbs of my hometown.  My brother and I were spending another night with my cousin, looking forward to the traditional night of watching a double feature in the living room of his tiny downstair apartment.  We loved to stay the night, as my aunt seemed to have no qualms about the type of films we would be allowed to view.  Compared to my mothers restrictions on something as seemingly innocent as Strawberry Shortcake or The Care Bears, a film that featured any worldly vice or plot was like a trip to Fantasy Island.

This night, my cousin was ecstatic.  He had stated that he was a fan of both films on the bill, and was sure we would equally enjoy them.  We turned down all of the lights, grabbed our individual servings of Jiffy Pop, and sat down to watch the first of our VHS tapes that night.

Sleepaway Camp was the first feature.  The second feature was the film I chose tonight for this series on frightful films during the month of October.  I chose the film not because I remembered it as a classic, but because amazingly, I remembered nothing about either film prior to tonights viewing.  I simply remembered the title of the films, and have wanted to revisit them both since my days as a youth.

As I write this, I wish I could unremember once again. 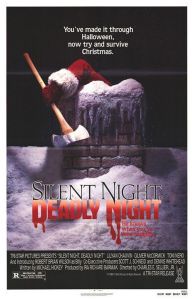 Years after witnessing the brutal murder of his parents, a young man goes on a murderous rampage, dressed as Santa, choosing those he deems as “Naughty” as his victims.

What the 7734 were they thinking?  My word, what a travesty.  There is nothing about this film that I found enjoyable, frightening, intriguing, or any other emotion other than belwilderment.  While I could remember nothing about the film (I must have blocked it from my memory upon my initial viewing), I was aware that it spawned 4 sequels.  How that happened is beyond me.

The film is a worthless slasher pic that was as painful to watch as Chinese Food by Alison Gold.  I would have enjoyed it more had I miraculously experienced a Stay Tuned moment and found myself one of the victims of Billy’s axe to the stomach.  The dialogue, acting, plot, deaths, costuming, sets, all are about as shallow as my toddlers swimming pool.

I understand that parents boycotted the film upon its initial release due to its subject matter of a killer Santa.  I would rather have picketed the bank that funded this mess for wasting peoples money on such dreck. 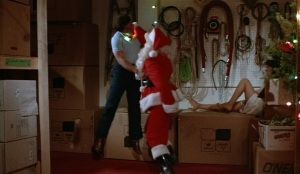 If you are as wanton as the un jovial man in red, by all means, rush out and rent this stinker.  If you are of the same character as the family in the Saturday Night Live skit The Gross-Out Family, then ask for the collector’s DVD box set of this film for your Christmas gift.  Otherwise, save yourself the misery and rent Misery instead.  At least you’ll enjoy the maniac with an ax (or a hammer in the theatrical version) much more.