I dislike cats.  I’m aware that many filmmakers have the same lack of appreciation for the beasts with 9 lives. Cat’s Eye, Pet Sematary, The Black Cat, The Cat People, even A Nightmare on Elm Street 2 all feature these ferocious felines.

It was with much trepidation (not really) that I sat to watch today’s film.  I knew that I would likely have an experience of shock simply from the subject matter alone.  I braved my fears, however, and happily accessed my Hulu+ account to view this classic of Japanese horror.

31 Days of Films and Frights – Day 29: Yabu No Naka No Kuroneko “Kuroneko” 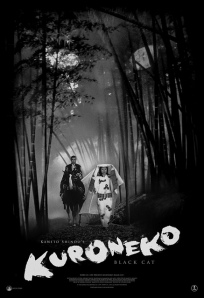 After being brutally raped and murdered by a gang of wandering samurai, a woman and her daughter return from the grave to haunt and kill them.

What odd choices of filmmaking, such as random jump cuts, unmotivated images of a black cat, disjointed jumping of the plane, cuts of ghosts and fallen samurai bodies out of nowhere, and the continual bamboo forest immersed in a dense fog imagery.

Some of the visuals were haunting, however.  The women with their painted on eyebrows, floating in their white kimono, amidst the secluded cabin in the woods, certainly ought to be enough to hold the interest of many aficionado’s of horror.  Sadly, I found the aforementioned problems too problematic to be saved by the later interesting elements.

It simply didn’t rise above anything other than average.  Certainly not after watching the superior Onibaba.  Thankfully, however, it’s not as bewildering as House.

I’ve long been a fan of Japanese cinema. Akira Kurosawa, Kenji Mizoguchi, Kon Ichikawa, and my favorite, Yasujiro Ozu, are masters of cinema few western audiences have seen. Amazingly, other than the run of horror movies that came from the land of the rising sun a few years back, such as Ringu and Ju On, I wasn’t familiar with any other in that genre.

Thankfully, a recent trip to the video store, and my viewing of their Criterion collection they have near the back of the store, I came across a few films considered to be classics in the J-horror genre.

With this new knowledge, I followed up my visit by searching both Hulu and Netflix for other films originating from the land famous for samurai, geisha, and ninja.

Happily, today’s film was one of the films featured on Hulu+ Criterion Collection. Without hesitation, I pressed play on my tiny appleTV remote, and took in the surprise that was today’s entry. 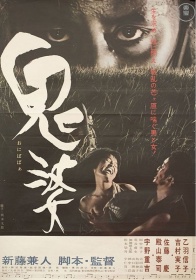 I wasn’t sure how this film was considered a horror film for most of the film. I felt more like a revenge picture, and an excellently crafted one at that. However, [SPOILER]…

I was completely blown away by the twist near the end of the film that confirmed this to indeed be a horror film. The mastery that Shindou displayed on bringing together this morality tale was superb, and worthy of all the praise I’ve since read up on for this film.

It was shocking to see such graphic sensuality, given the year the film was made. Certainly not a film I’d be able to show in my film appreciation class without a major disclaimer.

The cinematography is simply amazing. The waves in the grass, the use of shadows, and the framing of each scene is a marvel to see. The acting is equally as impressive. This is not your over-the-top theatrics found in many other films of that same era. Instead we are witness to the depravity of war, and the loneliness of seclusion, in a manner that is completely engrossing.

I will never feel the same way when I am faced with the choice of the shortcut through the grassy field or the long dirt path around it. I certainly will be needing a proper foot cleansing after such a proposition presents itself.

“Just try it” the pusher had told me. I knew better, however. I’d heard all about the effects of acid drops, and I wanted nothing to do with it. I had heard about people having “flashbacks” years after dropping the hallucinogenic drug, and I had no interest in having one come to me in the middle of an important speech, or while I’m piloting an impossible mission to rid the world of an evil galactic empire (you see, I am capable of ambitiously dreaming without the aid of a chemically induced chimera).

As I began to view today’s entry in this month long series of horror films timed to the upcoming All Hallow’s Eve, I suspected that somehow someone had slipped me a Mickey at some point in my past, and I was now suffering the onslaught of the aforementioned HPPD. 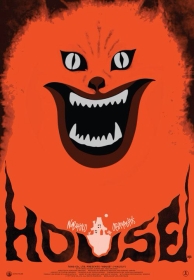 A schoolgirl travels with her classmates to visit her reclusive aunt, only to tragically learn that the country house in which she resides is alive.

Having lived in Japan, and thus having an understanding of their fascination with watermelons, I was able to relate to the set-up of bringing the delectable fruit as a gift to the oba-san. I was not, however, able to relate to the outcome of such a generous gesture. Needless to say, I will forever think of watermelons, and, much to the dismay of my toddler daughter and her fascination with all things Snow White, wishing wells, in a much different light after having watched this fanciful flick.

The film is certainly to be commended for its effort and originality. However, much like a 2 year olds finger painted murals on the wall in the recently remodeled foyer, it may not be welcomed nor retained. 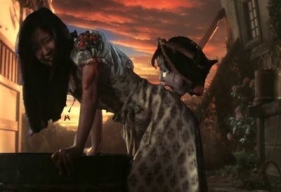 The acting in this foreign picture was amateurish. I understand that most of the cast were mere dilettantes, and it shows. Of course, there is so much zaniness going on in this film, I’m not sure I even paid much heed to the acting chops of the talent. Cheesy effects are the best way I can describe the effects here. Cartoonish ghosts, plastic body parts, kaleidoscope of colors, novelty shop eye balls, the outlandishness never lets up.

The story doesn’t serve much purpose, either. It simply serves to showcase the forenamed effects. I honestly felt Obayashi had lost his mind, and this film was the result. 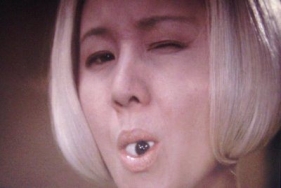 Don’t confuse this with excellent William Katt film of the same name. This is not another version of that same story. In fact, in has more in common with This House Possessed than it does the franchise starter from 1986.

If you want to be bedazzled by the puerile antics of a film, this is for you. If you hate cats and find them as creepy as I do, you’ll want to visit another haunt.

Don’t say I didn’t imashimeru you.

John Barrymore.  Frederic March.  Boris Karloff.  Spencer Tracy.  All names synonymous with todays character.  Hammer Studios, no stranger to the character themselves, decided to revisit this iconic character, and added an interesting twist to set the film apart from the others before it.

In fact, they added a few twists, melding together both historically factual elements with the obviously fictional.  What was born from such efforts?  Todays film, of course!

A Review of Films Filled with Frights

END_OF_DOCUMENT_TOKEN_TO_BE_REPLACED

Vampire films are all the rage in today’s marketplace.  We have films like those in the “Twilight” franchise, we have HBO’s hit “True Blood”, and we have films nobody has seen such as “The Vampires Assistant”.  Recently, there was a remake of today’s Swedish film that hit the local cineplex, to mostly average reviews and abysmal box office numbers.  With that, I decided to give today’s pic a viewing.

A Review of Films Filled with Frights

Oskar (Hedebrant), a 12 year old boy, is the butt of a classmates (Rydmark) bullying, and tends to spend time by himself outside his mothers Stockholm apartment, where neighbor Eli (Leandersson), a 12 year old girl, lives.  One winter night, he meets Eli for the first time, and instantly forms a bond with this mysterious kindred spirit.  What he doesn’t realize is that Eli’s solitude is self-imposed, as she in actuality is a centuries old vampire, tormented by the curse that bedevils her.

This gothic character piece is more a brooding tale of loneliness and friendship set in the world of vampires than a horror film.  Cinematographer Hoyte van Hoytema’s eerie and haunting work is absolutely stunning to look at.  At first glance, one would assume the prima facie of the cinematography is of the land as a cold, dark, and blue winter.  However, I would say that it is describing the characters in their lonely, cold, blue lives.

The acting of the children is stellar.  Watching the face of Eli it is easy to feel her pain she suffers internally, as well as her hesitance to engage in a relationship with a human.  This is not “Twilight” teeny bopper fare.  It is a character driven piece with nary a predictable moment.  The score is equally as menacing as the story, and lends itself to the unusual vampire tale in the most engrossing of ways.

Some gruesome effects, even more disturbing coming from the horrors of a 12 year old child!  Well worth the time to take this pic in.  No surprise that an American remake (“Let Me In”) has hit theaters as I write this review.

Available on Amazon: Let the Right One In [Blu-ray]

Or Amazon Video on Demand: Let the Right One In (English Subtitled)

or Let the Right One In (English Dubbed)