Haunted houses.  They pepper the landscape as Halloween draws near.  Many festivals and campgrounds feature some form of the attraction, be it a walk-through, a car and rail, or a religious variant intent on scaring a customer into paradise.  When it comes to the celluloid variant, Hollywood is no different.

Sometimes, they combine a genuine tale of a ghostly abode with a possession film.  Thankfully, today’s film fits such a bill. 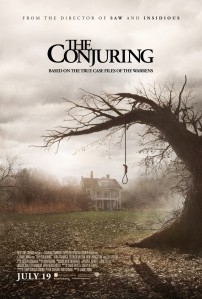 From the opening moments of this film, I knew I was in for an immersive experience in which I would likely lose much sleep.  The music, excellently crafted, sets the tone for the film the moment the picture fades from black.  I instantly reached for my iPad to begin a second screen experience in order to see the credits of composer Joseph Bishara (Insidious, Insidious: Chapter 2) and cinematographer John R. Leonetti (Insidious, Insidious: Chapter 2, The Mask), whose camera work was beautifully haunting as well.

The editing, something I always notice, was superb.  Each scene is allowed to breath, only cutting when necessary, facilitating the eeriness necessary to amp the nerves of the viewer into the stratosphere.

That’s not to say the film was flawless.  There were certain story elements that I found baffling, such as the hidden room being the room that contains the heater to heat the house (they didn’t notice during their initial purchase that it appeared the house had no heater nor basement?)  However, the film was so excellently crafted that I was tempted to pause and watch an episode of Golden Girls every 20 minutes in order to take the edge off.  The unknown is always more tense than what we can see, hence the reason Hitchcock’s films were so suspenseful/successful. 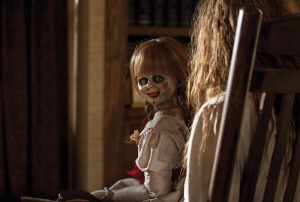 Prepare the chamomile laced with Xanax.  Otherwise it’s bound to be a long night…

31 Days of Films and Frights – Day 7: The Possession

I try to reserve judgement until after I’ve seen a film in it’s entirety. I owe that much to the filmmakers who’ve spend a large portion of their year (or more if you are making Cleopatra) attempting to put together something worth my hard earned ducat. However, after watching today’s film, I find that practice more arduous to do.

Not having had any prior knowledge of today’s film preceding my viewing, I was surprised to see the logo that opens the film. As soon as I saw Ghost House Pictures insignia, I had reservations. Afterall, I found the last two films I’ve viewed from Sam Raimi’s company (Drag Me to Hell and 30 Days of Night) to be less than stellar. I also didn’t find their foray into television programing (Legend of the Seeker) anything noteworthy, although I did stick it out for the entirety of its two campy seasons. I’m not sure what it is. Perhaps the films are rather futile for horror films, feeling more like a big budget action flick than a atmospheric horror film? Perhaps it’s the over the top sound effects, the clean and sterile lighting, the same cookie cutter characters in each film, or the fast paced jarred editing? Either way, today’s film fell squarely into the fold of their previous efforts.

31 Days of Films and Frights – Day 7: The Possession 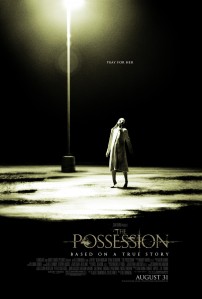 A young girl, after finding an antique wooden box containing mysterious symbols carved into it, begins to suffer abnormal behaviors, much to the consternation of her recently divorced parents. It soon becomes apparant she is possessed by an entity not of earthly origins, and the race against the clock to rid their prepubescent daughter of the demonic spirit begins.

From the very first scene, I knew I was in for more of the same. An old woman stands in front of a box, demonic voices coming from within, when suddenly, timed to the frantic editing, she becomes possessed and begins to contort and fling across the room.

We then are introduced to the characters that we soon care nothing about. They take actions that don’t make sense. For instance: Why does the girl get startled by the old woman who is the neighbor? Why does she slowly follow her and peer into the window. Who is the bandaged freak who screams at her? Why is the girl allowed to stop off and pick up the box? Why does she want it? Why does an entire room of supposed God fearing Jews feign fear at the mere sight of the box? Or are they truly afraid? Are they all really faithless? Too many odd questions.

Frustratingly, in addition, there are scene after scene of odd edit decisions. There are numerous instances in which the tiniest semblance of suspense is building, the camera is dollying, the tension is at a high, and it cuts to black mid-beat, mid sound cue, sounding like a piece of the soundtrack is missing, rather than a meticulously timed trim. Not sure what effect they were going for, but I found it jarring and annoying.

I also found vexing plot devices that simply come across as slipshod or indolent, although I know that certainly wasn’t the case. However, I’m not sure how else to react when situations such as “Little Girl is vegan, and is ravenously tearing into a raw steak, therefore she MUST be possessed” are a major plot point. Why else was that silly conversation that opens the film there? Am I instead supposed to see it as a message? Either way, it strikes me as stodgy and amateurish. 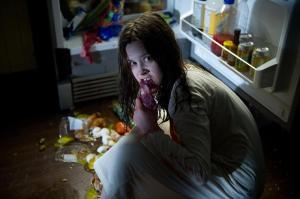 Maybe it was the title that doomed this film? A quick search of other films with the same title show that film critics such as Leonard Maltin are rather dismissive of them, as well (1981-★½, 2002-★★, 2010-★½). However, to avoid sounding uncouth, I will admit that it did deliver on some scares. Nonetheless, whereas the frights found in a film like The Exorcist certainly command repeat viewings (if one so dares), this film is too marred by the aforementioned issues to warrant any kind of further thought. It was simply an average film. C rating.