31 Days of Films and Frights – Day 23: The Witchfinder General (The Conqueror Worm)

It was a dark and stormy night, my brother and I huddled under the handmade quilt that our grandmother had made for one of us as a birthday gift years earlier. Gripped in hand, flashlight at the ready, was my brothers 1984 Thriller Talking View-Master. We took turns viewing the mesmerizing images from the famous John Landis directed music video for the King of Pop’s zombified music video. Slowly, we progressed through the images, anticipating the moment when our favorite section of the stereoscopic viewer with a soundtrack would arrive.

After a few brief moments, our expectancy was quenched by the haunting narration from the master of macabre, the dab hand of horror, the cognoscente of creep: Vincent Price.

To my brother and I, there was no other actor. We would often make pilgrimages to a neighboring town on Saturday afternoons to visit our favorite comic shop, Dave’s, and then saunter across the street to the old music hall in order to watch a double feature of films from years before. Many of those times one of those films would feature our favorite film star of horror. It was there, on the big screen, on a print that had seen far better days, that we first saw House of Wax in 3D, The Fly, Tales of Terror, and House on Haunted Hill.

So it was with great anticipation when I learned of this film, only weeks ago. An acquaintance of mine was questioned by a film industry news site what he would pick as his top horror films of all time. As you can guess, today’s film was on that list. Thankfully, the excellent folks at Scream Factory had also recently released it on glorious Blu-ray.

31 Days of Films and Frights – Day 23: The Witchfinder General (The Conqueror Worm)

Matthew Hopkins, a man calling himself a Witchhunter, roams the countryside, offering his services to any paying community in order to rid themselves of so called witches. Unfortunately for the small village of Brandeston, Suffolk, he chooses them for his next “visit”.

Wow. That’s the 1st word that I thought of as I sat through this fictional tale of an actual person during a disturbingly dark era in modern human history. This film is brutal. It isn’t filled with gore, there aren’t any ghosts, not a possession nor masked murderer of sexually charged teens in sight. What we have is a morbid tale of the infamous witch hunts. As I watched this film, the thought entered my mind that if even a fraction of what is on display here were true, it would be more disturbing than anything the minds of Eli Roth or Dario Argento could produce.

The acting is top notch. The story is equally as engrossing. The subject matter is repulsing. The direction and soundtrack is revealing, in that the most disturbing horror is what we as humans do to each other, more than what any My Buddy doll come-to-life could wreak. Those responsible for the atrocities fictionalized here are the true Pin Heads of our society. 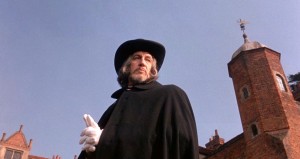 I’m glad that I “found” this film. I’m hopeful that others will be as intrigued. I’d recommend screening your own personal Double Feature, rounding out the bill with a film featuring another of my favorite veterans of horror, The Wicker Man, staring Christopher Lee.

I should forewarn you in advance, however, that you certainly won’t find any spoonfuls of sugar in these versions of the UK.